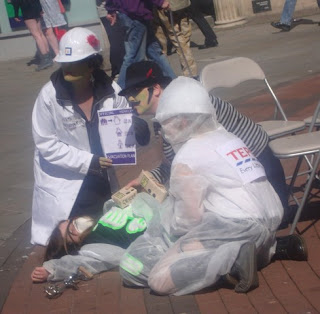 12 April 2011 - Campaigners from South West Against Nuclear were in Bridgwater town centre this lunchtime as part of a series of national events called for by the Stop Nuclear Power Network in response to the events unfolding in Japan. Sir Vile & his Personal Assistant Miss Information were recruiting unwitting victims on behalf of EDF for their great green rip off – new nuclear build. (1) 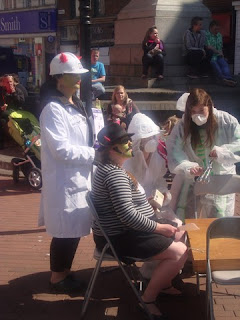 Says Ornella Saibene “We believe that EDF will make no permanent contribution to jobs in Somerset – increases in temporary employment over the construction phase will more than likely be offset by job detriment in the local business sector. Particularly hard hit will be the tourist industry as the A39, the gateway to the south west tourist destinations, will be affected by gridlock on roads caused by such a development, not to mention tourists being put off holidaying near nuclear power stations in the wake of the Japanese crisis.” 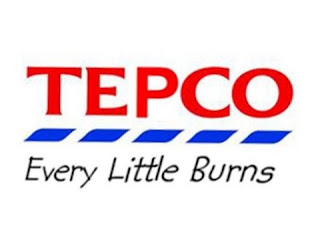 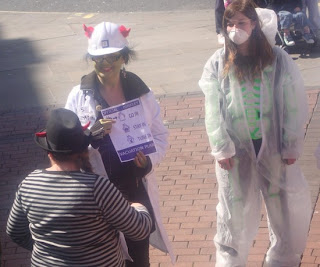 Local resident Nikki Clark says “I’m absolutely disgusted that Sedgemoor District Council are still prattling on about jobs, yes Somerset needs jobs, we need sustainable jobs with a living wage not jobs where the prospects are cancer, ill health, being experimented on by the nuclear industry (3) and all the time living with the possibility of having to clean up nuclear accidents. What kind of a prospect is that?” 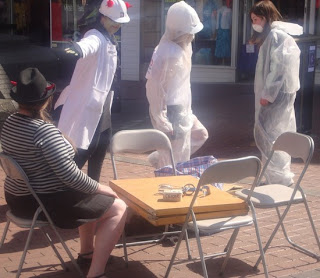 All images courtesy of South West Against Nuclear
Posted by dv at 21:45