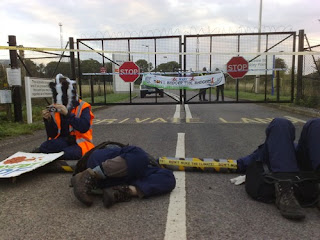 Since 7am this morning, anti-nuclear campaigners from different anti-nuclear groups which are part of the Stop Nuclear Power Network [1] are blockading the access road to EDF's Hinkley Point nuclear power station in protest against EDF's plans for nuclear new build and what they are calling a flawed consultation.

Even before EDF has secured planning permission for Hinkley Point C, the company wants to begin with 'enabling works', which has upset the local community. Nikki, a Bridgwater Mum said: "From this autumn on, EDF wants to dynamite and bulldoze 435 acre of green fields - habitats for badgers, bats, and other wildlife, and in close proximity to Bridgwater Bay, which is a sanctuary for thousands of waders, ducks, and other sea birds. It is a joke to think this land could be restored - as EDF claims - should Hinkley C not be built."[2]

"To resist EDF's plans for nuclear expansion, not only here at Hinkley Point, but also at Sizewell, Bradwell, Hartlepool, and Heysham, we call for a boycott of EDF [3]. EDF might try to greenwash itself, but however hard they try, EDF still stands for nuclear power, and here in Hinkley Point also for Eagerly Destroying Fields. As consumers, we have the power to make our opinion known by boycotting EDF, but also by taking nonviolent direct action. If EDF wants to nuke the climate and the planet, the nonviolent resistance is not just an option, but a duty - at Sizewell, and here at Hinkley Point" [4], says Nicola Deane from Suffolk.

[1] The Stop Nuclear Power Network is a UK-based non-hierarchical grassroots network of groups and individuals taking action against nuclear power and its expansion and supporting sustainable alternatives. We encourage and seek to facilitate nonviolent direct action, as well as more conventional forms of campaigning. For more information see http://stopnuclearpoweruk.net

[3] For more information on the campaign to boycott EDF, see http://boycottedf.org.uk

[4] Some of the activists involved in today's blockade also blockaded Sizewell nuclear power station in Suffolk on 22 February 2010. See http://stopnuclearpower.blogspot.com/2010/02/local-democracy-dumped-sizewell-nuclear.html