Are you planning to win?

Time to get organised to stop a new generation of nuclear power stations being built.

Saturday 21 November (11am) to Sunday 22 November (4pm), central London (please get in touch for venue details)

Demo at Australia House - No nuclear dump on aboriginal land! 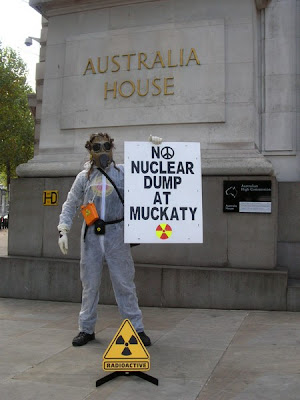 Australian Resources and Energy Minister Martin Ferguson is in London and Paris this week. In response to an emergency call-out from the Australian Beyond Nuclear Initiative for international solidarity against a proposed federal nuclear waste dump on aboriginal land at Muckaty in the Northern Territory, a small demo was held at very short notice outside the Australian High Commission in central London.

Two people dressed in white overalls and gas masks held a sign reading "No Nuclear Dump at Muckaty" and handed out leaflets.

At the end of the 90 minute demo, which attracted the attention of diplomatic police as well as 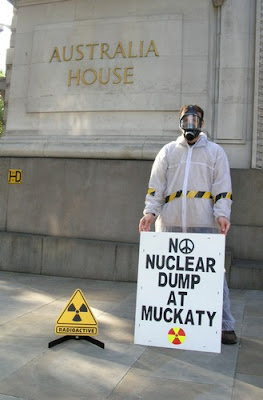 visitors to the building and passers by, a letter addressed to Mr Ferguson and signed by members of the Muckaty aboriginal community was delivered by hand to a representative of the High Commission.

A third supporter arrived shortly afterwards: he had just come from a meeting about nuclear power which overran.

From the Beyond Nuclear Initiative project in Australia:

I am writing to seek support for Aboriginal communities opposing the imposition of a federal radioactive waste dump on their traditional country.

Australian Resources and Energy Minister Martin Ferguson will be in London this week (12-14 Oct) to attend a Ministerial meeting of the Carbon Sequestration Leadership Forum, ahead of attending an International Energy Agency Ministerial later this week in Paris.

Minister Ferguson is aggressively pro-nuclear and is fast tracking uranium projects across the country. He is a champion of coal, a climate change sceptic and deeply dismissive of the promise of renewable energy.

He also has carriage of radioactive waste management in Australia and is currently pushing ahead with controversial plans to impose a federal radioactive waste dump on Aboriginal land in the NT – an issue of growing concern here.

This issue would benefit greatly from some coverage and profile as Ferguson’s approach of denying the issue any oxygen has been disturbingly successful in removing it from the national media radar. However he is also very exposed on this issue: his approach is out of step with Federal Labor’s 2007 federal election promises, community mood and international best practise.

Nuclear People Power has joined the "Twitterverse"! For the latest on the nuclear comedy industry, resistance to a radioactive future and the push for sustainable energy solutions, checkout @NukePeoplePower