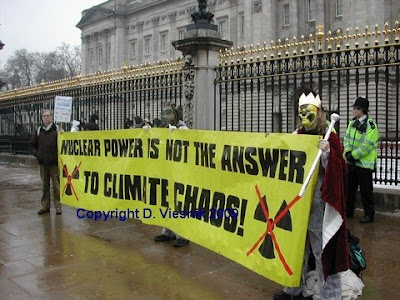 Anti-nuclear power campaigners dressed as “Radioactive Royals and nuclear guards” protested in front of Buckingham Palace on Thursday, 5 February as nuclear industry bigwigs were wined and dined by the Duke of York, Prince Andrew.

Hundreds of tourists, visiting the Palace for the Changing of the Guard, were amused to see “nuclear guards” taking their place at the gates. They held up a large banner reading “Nuclear Power is Not the Answer to Climate Chaos!” and a placard reading “Royal Nuclear Family? No Thanks!”, drawing attention to the fact that Prince Andrew, the UK’s Special Representative for International Trade and Investment, was hosting a gala lunch at the Palace for the nuclear industry, presumably to plot how best to promote their toxic greenwash agenda at home and abroad. [see note 1]

The action was called by a new UK-based network, Nuclear People 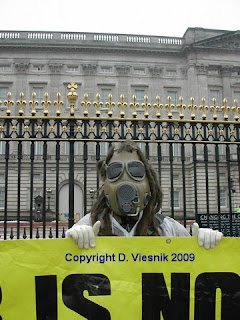 Power, which aims to promote nonviolent direct action and visible campaigning to prevent the construction of a new generation of nuclear reactors in the UK and globally. Joining the protest were representatives from the Campaign for Nuclear Disarmament (CND), Stop Hinkley / Shut Oldbury, Shut Down Sizewell and a woman from the Bradwell area. Among the sites earmarked for new nuclear build are Hinkley Point in Somerset, Oldbury in Gloucestershire, Sizewell in Suffolk and Bradwell in Essex, as well as Sellafield in Cumbria, Wylfa in north Wales and Dungeness in Kent.

Daniel Viesnik, from Nuclear People Power said, “Nuclear power is a huge and dangerous distraction from the genuine solutions needed to prevent a global climate catastrophe whilst providing for the future energy requirements of the UK and the world in a safe, sustainable and affordable way. Instead of wasting billions of pounds building new nuclear white elephants, generating ever increasing quantities of extremely hazardous radioactive waste that we can’t safely deal with and increasing the risk of global proliferation of nuclear weapons; energy companies and governments alike, the British Government included, should massively invest in genuine green alternatives, such as wind, solar and wave, decentralised energy and energy efficiency and conservation.”

He added, “The royal family would do well to distance itself from the nuclear industry, with its long history of cover-ups, cronyism and self-interest, and lack of regard for health, safety, indigenous rights and the environment.”

Mell Harrison, from CND Eastern Region, Shut Down Sizewell and Nuclear People Power said, "What's needed is not lunch at the palace with a prince but accountability, transparency and the truth about nuclear power and the nuclear industry. Why, for example, isn’t the public being told that waste from new [EPR] reactors will be up to seven times more hazardous than that produced by existing ones? [see notes 2 & 3]. We still don't know how to deal with the current nuclear waste, let alone even more hazardous material." 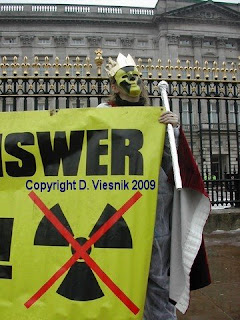 She went on, “I live near the Sizewell nuclear power plant in Suffolk, where two new reactors are being considered. With significant costal erosion on this stretch of the coastline and already over ten years’ worth of spent nuclear fuel rods in storage at the site, any new nuclear reactors here would be nothing less than a health and safety nightmare. Nuclear power is not the answer to climate chaos: it is the pathway to a radioactive future."

She added, “Given Prince Charles’s concern for environmental issues, it would be interesting to hear the conversations between him and his younger brother [Prince Andrew] on this.”

The Observer newspaper reported that Prince Charles has recently appointed Benet Northcote as his deputy personal secretary. Northcote was previously employed by Greenpeace, where he directed campaigns against nuclear power. [see note 1]

EDF Energy, the 85% French state-owned energy giant which employs Prime Minister Gordon Brown’s younger brother Andrew Brown as its UK media chief, plans to build at least four controversial new French-designed EPR nuclear reactors in the UK, starting with two at Hinkley Point in Somerset and two at Sizewell in Suffolk. The EPR, or European Pressurised Reactor / Evolutionary Power Reactor is a collaboration between 90% French state-owned multi-national Areva and German firm Siemens. It has been plagued by safety problems, multi-billion pound / euro cost overruns and delays running into years during the construction of the first two prototypes, at Olkiluoto in Finland and Flamanville in Normandy, France. To date, not a single EPR has been completed anywhere on the planet, yet the technology is being aggressively peddled by President Nicolas Sarkozy of France to Britain and the rest of the world.

Jim Duffy, Stop Hinkley co-ordinator said, "People living near nuclear power stations have a nagging concern that they run a higher health risk from radioactive discharges or from a major accident. It's galling to see the royal family promoting this dirty industry which will blight West Somerset and leave a toxic legacy for many thousands of years."

"Prince Andrew has made a misjudgement in promoting nuclear power, now linking the Royal family with a controversial industry. Local communities are divided on the issue with many concerned about the long-term environmental and health consequences of reviving this previously moribund technology. It's poor judgement for the Royals to side with the industry in this debate." 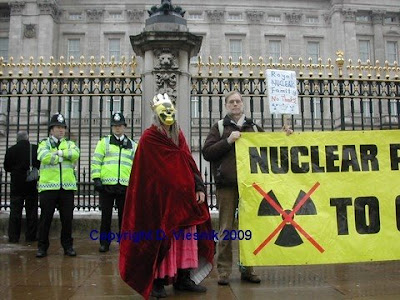 Dozens of police officers, including a Forward Intelligence Team (FIT) unit were on hand to greet the small group of protesters as they arrived at Green Park tube station, despite the fact that the demonstration had only been advertised by e-mail. Four out of the six demonstrators had their person and belongings searched under the pretext that they might be intending to commit criminal damage, in scenes reminiscent of last summer’s Climate Camp, near Kingsnorth coal power station in Kent. Nothing of suspicion was found, other than a small pair of scissors which had been used to prepare flyers for the demonstration.

Duffy commented, "We were closely shepherded by obviously nervous police, led by a Chief Inspector, who were waiting for us in numbers. Their searches of several campaigners evidently showed that their fear of terrorism is very much alive. But then building terrorist targets in the shape of nuclear power stations must surely be a much bigger fear."