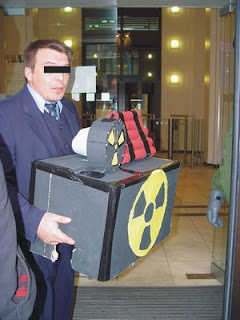 Frankfurt am Main, Germany (2 January, 2009) A banner rally took place in front of the entrance of Frankfurt Stock Exchange to deliver a symbolic ‘nuclear timebomb’ at the first business day of 2009. Environmental activists from bulgaria, finland, france, germany, scotland and russia demanded a “nuclear free new year” and said that financial mechanisms should not be used to support dangerous nuclear projects.

The ‘bomb’ represents the lethal mistakes of financing and investing in the nuclear industry; an industry that should be decommissioned not revived. Nuclear power is neither clean nor safe, and is not an acceptable solution for the climate change crisis.

Activists demonstrated at the continent’s financial centre to tell investors, traders and companies that investments for profits should not come at the cost of the earth. Natural and financial resources must now be directed towards healthy, sustainable developments in renewable energy, not developments that create short-term profits at the immeasurable cost to future generations.

“The nuclear industry puts us all in danger and investing in it must be regarded as an attack on human and environmental survival. The nuclear path is a dead end and the investors should recognize that before the next Chernobyl happens.” said Jason Wallace.

Companies such as Cooper Minerals, Areva, EoN, Siemens, EnBw, Vattenfall and RWE are being specifically targeted for their involvement in dangerous nuclear projects.