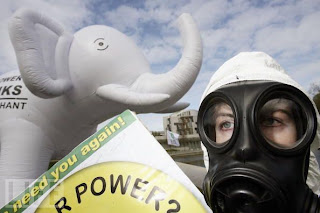 [* Due to engineering works on several of the lines serving Whitechapel and Aldgate East, you may need to allow extra time for your journey across London. You can use the Transport for London journey planner to help you plan your journey: http://bit.ly/7GVZCy ]

Please get in touch ASAP if you need a bed or crash space for one or more nights, or have specific access requirements.

As ever, there’s lots to discuss and share, including:

History of our network

Activists from various anti-nuclear, environmental and peace campaigns from around the UK, plus representatives from France, came together in November 2009 and March 2010 in response to national call-outs to discuss and plan taking action against nuclear new build. Over twenty activists attended each gathering. They have kick started a flurry of activity, including a blockade and four-day camp at Sizewell in Suffolk, a banner action inside Parliament, various demonstrations, the production of an info broadsheet, plus various other campaigning activities around the country. This is a good start, but we need larger numbers of committed activists, representing various different groups (or none), who share our concerns about nuclear power and unsustainable energy policies to get involved and help us expand and develop the network.

To find out more about us and our activities, please visit:
http://stopnuclearpoweruk.net


Nuclear white elephants on the charge!

The nuclear industry is steaming ahead with its plans for a “fleet” of dangerous, expensive and unnecessary new nuclear reactors in the UK. The first application, for Hinkley Point in Somerset, is due to be submitted later this year. But only recently, the French Nuclear Phase Out Network exposed secret documents showing that defects in the design of Areva's EPR, the reactor chosen by EDF for Hinkley, and Sizewell in Suffolk, could lead to a Chernobyl-style nuclear catastrophe. [1] Scores of academics, politicians and campaigners are now calling for a public inquiry on the justification process for new reactors. [2]

Meet the new Government, same as the old

The new Conservative - Liberal Democrat coalition government, like its Labour predecessors, supports the building of up to ten new nuclear power stations in the UK, but has pledged that there will be no public subsidies for new nuclear build. Chris Huhne, the new Energy Secretary, and his Liberal Democrat party were strongly opposed to new nuclear build before entering into government last month, but now they are in bed with the Tories, they seem to have changed their tune and have agreed not to oppose new nuclear.

No subsidies for nuclear?

As for the 'no subsidies' pledge, no nuclear power station has ever been built anywhere in the world without public subsidies. It is clear that the taxpayer would be left with a hefty bill if nuclear new build goes ahead through a host of hidden subsidies [3,4]: these include the proposed hike in ‘carbon pricing’ that would favour new nuclear, major cash from the public purse to pay for decommissioning the power stations and dealing with the waste, and underwriting the massive insurance liabilities of an accident or terrorist attack. Decommissioning the existing nuclear facilities alone is estimated to cost the UK taxpayer well in excess of £70bn.

Multinational nuclear corporations - among them France’s EDF and Areva, and Germany’s E.ON and RWE Npower - in collaboration with their political sympathisers / cronies in Westminster, are seeking to capitalise on increasing public concern over climate change with attempts to rebrand nuclear power as a “green” source of electricity. They know that the general public will not accept new nuclear reactors if they learn the truth about this secretive and dirty industry.

The long history of cover-ups, deceit and shoddy and dangerous practices stretches back over fifty years, when nuclear power was first developed as a means of producing plutonium for the atomic bomb. The industry wants us to believe that a leopard can change its spots, but the only thing that really seems to change is the PR tactics. The vested interests of the multinational energy corporations will always come before concerns for the environment and the health and safety of the public. Needless to say, with nuclear energy and waste the consequences can be devastating, as seen at Chernobyl and Windscale, for example.

The fact is that new nuclear reactors would do too little too late to meet our carbon reduction targets, and at too high a price in terms of economic, health and environmental costs. Nuclear expansion would lead to a greater risk of global nuclear weapons proliferation, more and deadlier radioactive emissions, a legacy of even more nuclear waste being dumped indefinitely on local communities with no permanent solution in sight, and the ever-present risk of a Chernobyl-style nuclear catastrophe or terrorist attack. Nuclear power is a dirty, dangerous and expensive distraction from the wholesale changes needed to bring about a safe and sustainable low-carbon future and green industry for the UK and the world, based on more modest consumption, energy efficiency and conservation, and renewable and decentralised energy; a future in which we no longer have to rely on non-renewable and unsustainable uranium, plutonium and fossil fuels.


*Come and join us in London on Saturday 19th June as we work to build a powerful movement to resist nuclear expansion.*
If you want to be involved but can’t make the meeting, please ask to be added to our e-mail list.

For more info and updates and suggestions for additional agenda items, contact: