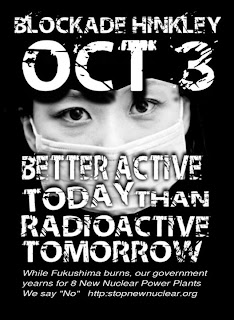 People from all over the UK are set to descend on Hinkley Point nuclear power station to protest again EDF Energy’s plans to build two new mega-reactors next to the existing site.

More than 100 people have already pledged to join a symbolic mass blockade at the entrance to Hinkley Point in Somerset [south-west England] next Monday, October 3rd. On Saturday 1st October, anti-nuclear protesters will also join local residents in a march and rally close to EDF Energy’s regional HQ in nearby Bridgwater.

The new reactors at Hinkley will be the first of eight new nuclear power stations to be built in the UK. Spokesperson, Andreas Speck, said: ‘This blockade is designed to warn the government and EDF that those who understand the real dangers of nuclear power are not prepared to stand by and allow these untried, untested, reactors to be built.’

‘The blockade demonstrates that people are prepared to use civil disobedience to stop the bulldozers from coming in and paving the way for a potentially lethal technology that has no place in the 21st century,’ he added.

Local resident, Nikki Clark said she fears for her children’s future. ‘There is already a lot of concern in the area about the radiation being discharged into the sea and air from the current nuclear power station at Hinkley Point.’

She continued: ‘We know from Chernobyl that children are particularly vulnerable to radiation in both large and small doses. Now the disaster at Fukushima has shown that even in one of the most technologically advanced countries in the world, the rights of children to be protected from radiation have been ignored. We don’t trust nuclear power and a lot of local people are saying enough is enough.’

In a message of support to the campaigners, leading environmentalist, Jonathon Porritt, said, ‘The position of the UK government is extraordinary, given how the rest of the world has reacted to the Fukushima disaster. Nuclear has no part to play in the UK's energy mix.’

Porritt continued, ‘We can achieve everything we need in terms of secure, low-carbon energy primarily from energy efficiency, renewables and modern technologies like Combined Heat and Power. So we don't need it and I believe that we can still persuade UK citizens that it's the wrong thing for us to be doing.’

Notes to the editor:

Journalists are invited to meet key activists at the weekend protest camp from 2-3pm on Sunday 2nd October.

The blockade will begin outside the main entrance of Hinkley Point at 7am on Monday 3rd October and will continue all day.

The rally in Bridgwater is on Saturday 1st October and will run from 1-4pm.

More power to the peaceful elbows of the Hinkley demonstrators!