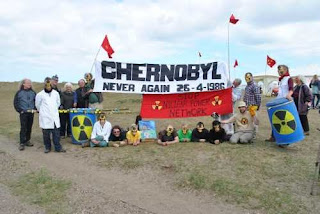 Around twenty activists from the Stop Nuclear Power Network [1] have held a ceremony on the beach in front of Sizewell nuclear power station in Suffolk (England) this afternoon to mark the 24th anniversary of the world's worst ever civil nuclear disaster, at Chernobyl (Ukraine). [2] They are looking to highlight the risk of a similar catastrophe happening in Suffolk, due to a reactor meltdown [3,4] or major radioactive waste incident. 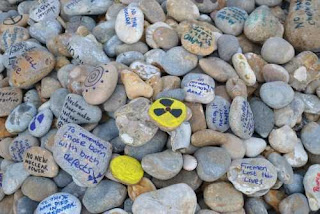 A silent procession was led by people in white coats with their faces painted yellow and black with radiation symbols who banged a large “nuclear waste” drum and carried another containing pebbles of “radioactive waste”. The participants then formed a circle and individually deposited pebbles with messages and symbols into a pile to form a cairn in memory of the victims of Chernobyl and the nuclear industry. A banner was held that read “CHERNOBYL – 26 April 1986 – NEVER AGAIN” 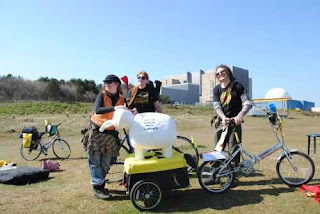 A protest camp has been taking place on Sizewell beach since Friday as part of an international weekend of action to remember Chernobyl and oppose expansion of nuclear power. [5] On Saturday, a demonstration was held at the entrance to the power station. Over the weekend, campers have also hosted a public meeting in nearby Leiston, held information and campaigning skills workshops on the beach and toured the flood-prone site where EDF, the owners of British Energy, plan to build Sizewell C.

The UK government is pushing ahead with its plans for ten new nuclear power stations across the country, with Sizewell planned to host one of the first new reactors. This despite the fact that even after 50 years, the nuclear industry has failed to come up with a permanent solution for its radioactive waste, which will remain dangerous for tens of thousands of years. [6] With current facilities at Sizewell B nearly full, plans are in place to build another temporary store where waste from the reactor would remain indefinitely in the absence of a permanent solution. This is before even considering the waste from any new reactor(s), which would be even more radioactive and too hot to transport for up to 160 years or longer.

Campaigner Mell Harrison from the Stop Nuclear Power Network, who lives in Beccles, Suffolk said: “We have left a cairn of stones on the beach to remember the many thousands of victims of Chernobyl and the nuclear industry. We hope this will remain as a permanent memorial and invite local people to add their own stones of remembrance. Marking this sad anniversary reminds us of the toxic legacy of our consumerist generation. With the nuclear industry unable to come up with a permanent solution to nuclear waste even after 50 years, we must stop producing any more waste and work within our communities to start living in more sustainable ways.”

2. Total deaths and predicted deaths from the 1986 Chernobyl disaster range from 4000 to half a million. Doctors in the Ukraine and Belarus are seeing “highly unusual” rates of cancers, mutations and blood disease, which are thought to be linked to Chernobyl.
http://www.guardian.co.uk/environment/2010/jan/10/chernobyl-nuclear-deaths-cancers-dispute

6. Nuclear Decommissioning Authority's Oxide Fuel Topic Strategy (2010) indicates that serious questions remain within the nuclear industry itself over whether any solution for permanent disposal of radioactive waste will ever be found.
http://www.nda.gov.uk/documents/upload/draft-oxide-fuel-topic-strategy-gate-0.pdf
Posted by dv at 15:58